Alien tattoos have become extremely popular over the past two decades, with popularity of shows like Star Trek and The X-Files at a fevered pitch.They have become particularly popular to those involved in the geek or nerd subcultures, as the acceptance of body art has been growing exponentially over this same period of time.

There are many designs to choose from, and they can have simple or complex meanings and designs.

As stated earlier, alien tattoos are extremely popular. Take, for example, the classic image of the gray alien which is usually associated with the Roswell UFO crash of the 1940’s and commonly portrayed by those who claim to have abduction experiences. The popularity of aliens in pop culture has also affected the common appearance of alien tattoos from series such as Star Trek or Star Wars, and symbols of these alien races. 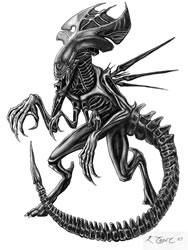 For another simple example, look at the Klingon “triblade” logo, which is particularly popular. For yet another example, look at the pop culture icon of Chewbacca from the Star wars series. As you can see, whether you are getting alien tattoos featuring a specific character, or a symbol of an alien alliance, you have many images to choose from.

Did we mention that H.R. Giger’s alien designs of the biomech variety are also very popular? These designs are quite dystopian, and can represent either a fan based interest in the movies, or an interest in the artist’s work as a whole. Alternatively, these interesting tattoos can represent a sort of disconnection or alienation from every day life.

Alien Tattoos in a Nutshell

Even from the small amount of information presented here, it is quite obvious that alien tattoos are an interesting and popular option for any one seeking to show to the world by way of body art their interests in science fiction or conspiracies.