Star tattoos can have any number of meanings, but there are a few designs that already carry meanings that are significant and may not require further embellishment.

Of course, star tattoos are always personal and their meaning can not be assumed unless you ask the person wearing one what their specific tattoo represents. Keep this in mind when you are considering one of these designs, as it may effect how others see it.

Symbolism and Meanings of Star Tattoos:

For some of the more common star tattoos, one might look to the nautical star, which is a representation of how ships used to navigate – by the stars. These are also often called compass stars, and would be tattooed on captains and ship crews for superstitious reasons. In other words, it was an indicator of hope that they would be guided home safely by the stars.

Shooting stars, on the other hand, often represent some short period of time that left a lasting 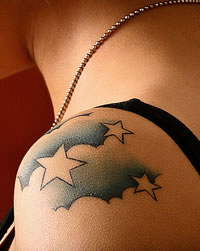 impression on the life of the wearer, from a relationship to a job or anything else that may have left this same sort of lasting impression.

Beyond these meanings, star tattoos can carry meaning as a result of the number of points on them. For example, the Star of David, or the six pointed star, has a strong tie to Judaism as a religious symbol. The points on the star also represent the six days of creation, with the center representing the day of rest or the Sabbath.

A pentagram can have a couple of different meanings. These are usually drawn as a single continuous line with no breaks and enclosed in a circle, and are usually indicative of a pagan religion, or if they are inverted and pointing downward, can represent evil or Satanic affiliations. Or at the more simple end of imagery, star tattoos can represent an interest in astronomy or the birth of a person or significant event.

Before getting any tattoo, one should decide what they want their individual tattoo to represent. Star tattoos are extensively popular particularly for first time tattoos.