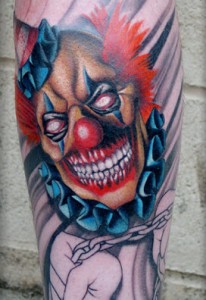 Clown tattoos are not an uncommon or particularly common tattoo design, and usually invoke one of two emotions in the onlooker and on the wearer displaying them. There are several types of clown tattoos, as well.

The history of the clown goes back by several centuries, when kings would have a court jester appointed to make jokes and entertain. Clown tattoos are most often used to portray humor or poke fun at how seriously some seem to take themselves, thus they are a constant reminder to be open to happy and fun experiences.

This is especially true in the case of jester style clown tattoos. There are often tattoos that are made to reflect the specific style of a clown or that depict a famous clown, the image of Bozo the Clown being a prime example of this type of art. It should be noted that not all clown tattoos are funny or meant to be positive, clowns have just as much history with being terrifying or negative.

Though the normal image of a clown is meant to show innocence or humor, some more modern designs can depict terror or fear. A good example of this is the Stephen King novel and film “It.” Another prime example is the character of “Joker” from the popular Batman franchise. Images of clowns that include blood or other somewhat violent imagery should be seen as having this type of effect. 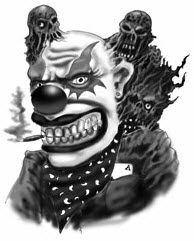 Clown Tattoos in a Nutshell

As you can clearly see, there are not a lot of meanings behind clown designs, but there are a lot of different designs that one could wear when considering them. Whether looking to portray a jovial and happy image with your tattoo, or looking to portray a grim message of terror, clown tattoos might be your best bet for doing so in a unique and personal manner.