Bird tattoos are rather common, being that there are a wide variety of species and they can range in meaning from positive to negative, bright to dark, and simple to complex.

Most cultures have some connection to birds in a spiritual context, and bird tattoos should have some sort of deeper meaning connected to them in this way. For a few examples, keep reading.

Some of the bird tattoos that are positive in meaning are of robins, which are associated with the dawning of spring and the improvement of weather after a cold, harsh winter. Perhaps because of this, they are symbolic of rebirth and happiness, and of renewal in the face of adversity. Bluebirds are, also, commonly associated with the same sort of meanings and time of year. 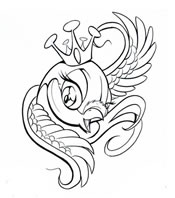 Eagles, powerful and large, are often used as symbols of power for political reasons, and are considered patriotic symbols for people who live in the United States, in particular. Furthermore, doves are often associated with the Christian religion or simply with purity. It should not be assumed that all bird tattoos carry positive meanings, however, as often darker colored or birds of prey can be considered negative imagery.

For example, the image of a crow or raven can be considered to signify sneakiness or a mastery of deception and cunning. In this way, they are indicative of manipulation. Another negative example of bird tattoos is presented in the image of a peacock, which is associated with vanity and self obsession. For images that show an importance in the weight of intelligence and wisdom, an owl might be the appropriate symbol.

Bird Tattoos in a Nutshell

Bird tattoos are very common, and it is hard to get a complete idea of what you could use for a tattoo from just one short article, make sure to select an image that you can personally relate to, as this is entirely up to your personal preference.