Cross tattoos are, perhaps, the most popular tattoo design of all. There are many varieties, and the meanings can range from the positive and religious to pain and anger. Cross tattoos are most popular for first time tattoos, and are a universally relevant symbol for many reasons. From simple to intricate, unembellished to complex, these tattoos are a universally recognized symbol, as well. Most religions and cultures involve crosses as an integral piece of their respective importance.

More on Meanings of the Cross Tattoos

As previously stated, cross tattoos can range in meaning from the positive to the negative, but they are usually rather personal in meaning to the recipient of the tattoo. The classic Christian cross, of course, represents religious conviction in that of the wearer. The gothic cross 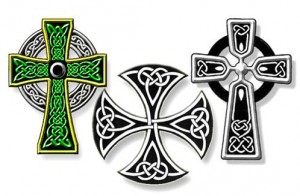 tattoos that are commonly seen usually have no religious significance, but represent pain, anger, or depression. They often have medieval or Victorian designs that are generally of dark imagery. Some common designs for this type of cross are of daggers with blood at the tip or coiled with barbed wire, which creates an obvious association with pain.

Cross Tattoos in a Nutshell

With a variety of imagery, both positive and negative, cross tattoos are often the best choice for some one receiving their first tattoo. Not only are the possibilities with selection and design endless, the wide variety of meaning can give those with a creative focus a simple base with which to develop the symbolism that they desire. That being said, their connotations can mean many things to many people, and the bearer of the tattoo can be the only one to say, for sure, what the specific meaning is behind their piece. It should also be of note that there are no particular preferred placements on the body to wear a cross tattoo, so the recipient can pick any location they feel appropriate without crossing cultural boundaries. Whether religious in intent or not, cross tattoos are a common piece of artwork that are appropriate in many situations.