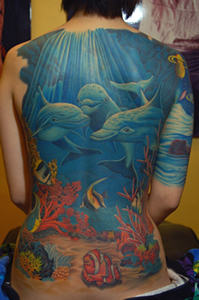 Dolphin tattoos are extensively popular in the world of body art, particularly amongst young women and girls who are looking for their first time tattoo.

Dolphins are known in modern times as a very positive symbol with a number of meanings that are both related and unrelated, and are often used as imagery in reference to the wearer’s personality, or simply a love for the beauty of the animal.

Meanings of the Dolphin Tattoos

Dolphin tattoos are usually performed as a result of the wearer’s admiration of the beauty of the animal itself. Though this is the most common reason to receive dolphin tattoos, there are some other reasons why some one might explore this type of design. Because of the flexibility of the symbol, many people can assign their own meaning and personal spin to the design in an effort to express themselves through it.

As previously stated, these are usually common amongst young women who wish to receive their first tattoo. Dolphins can also represent intelligence, since they are considered to be one of the smartest mammals and a lot of their deep personalities are equated rather closely with human intelligence. 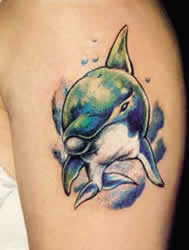 Beyond that, they are considered symbols for grace and good nature. Grace, for their ability to swim uninhibited over large areas without needing to stop, and good nature, perhaps, because of the increasing amount of domestication over them and their friendly attitude toward trainers and a trusting nature. Dolphin tattoos an carry a variety of meanings related to this, and make an attractive symbol because of their universally recognizable shape and pleasing imagery.

Dolphin Tattoos in a Nutshell

Dolphin tattoos are most popular amongst younger women and women who have decided on a dolphin design for their first tattoo, often because of their appreciate for the beauty of the animal, but often for the dolphin’s association with intelligence and grace.